Arguably the biggest event of its kind on the scooter enthusiasts' social calendar, this year's Isle of Wight rally promised some great weather for the thousands of scooterists that travelled from around Europe to attend the event.

The rally officially begins on the Friday of the August Bank Holiday weekend, but there were plenty of early arrivals having a few social drinks on Thursday night, sharing tales of their ride down, mostly in scorching hot weather.

Indeed this was a theme that followed throughout the weekend, with plenty of red heads, necks, noses and chests sported by those who forgot their factor 15!

Based around the rally site at Smallbrook Stadium on the outskirts of Ryde on the island, Friday morning saw scooterists arrived by the ferry-load and the large dealer market on site began to buzz. If you wanted to shop then you could buy almost anything from a secondhand classic to a brand new scooter, as well as browse both new and used spares for classic Lambrettas and Vespas offered by dealers from all over the country. Those with 'problems' scoured the market for necessary replacement parts while others with less ability took advantage of the onsite mechanics and booked their steeds in for essential repairs to ensure their ride home a few days later was trouble free.

For the rest there was rider clothing (although considering the weather the sale of waterproof overcoats was noticeably slow!), as well as plenty of fashion items too, along with plenty of accessories for both rider and scooter. 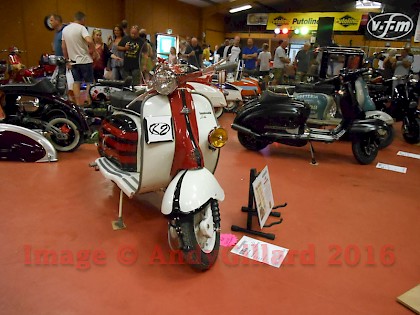 A number of bars onsite kept everyone cool in the heat, ice creams proved popular, and the constant stream of scooters arriving kept everyone nosing around at the variety of machines in attendance from all over Europe. Yes, from accents and number-plates alone there were scooterists from France, Belgium, Spain, Germany, Italy, Austria and all over the UK in attendance - the Isle of Wight is truly an International rally.

Friday evening saw ska band Orange Street wow the crowds up at the stadium, followed by Tom Hingley from Manchester band Inspiral Carpets with his new outfit, the Kar-Pets. For those scooterists staying in Ryde itself, the rally organisers VFM had arranged for a regular bus service throughout he weekend from the site to the seafront, that also took those residing on the site down to the town during the day for a change of scenery… and course to sample the local pubs!

Other entertainment on site included a Northern Soul Marquee in the evenings that doubled up as a live acoustic venue Saturday daytime.

Saturday of course is also when the large custom and classic scooter show takes place, again on the site, showcasing some of the finest scooters out there today. Whether your thing be a classic Vespa GS, an open frame Lambretta, the line up of 11 bikes from the Lambretta Chopper Owners Club, or high powered street racers, there were examples on show and more besides. If you know your classic custom scooters too then the Bass Ale Lambretta street racer was back out, and Dazzle also made its first appearance at the Isle of Wight since the 1980s. More modern creations includes the impressive and high mileage 'Start Me Up' Rolling Stones themed Lambretta, while the fast and intricately muralled Vespa PX 'For Valour' was among those who were deservedly awarded a trophy for their efforts.

And if you thought that Saturday's custom show was impressive, the rideout on Sunday presented even more scooters for those who love these machines. Not only were there a number of classic and customs out for a ride, despite the threat of a little cooling drizzle in the air, but plenty of other marques of scooter joined the more common Lambrettas and Vespas to clog up the roads of the island, en route to the rally site at Smallbrook. From the UK a Triumph Tina and BSA Sunbeam were spotted, but it was the Germans that were out in force with solo and combo Heinkels riding in, at least one NSU, a Simson, and a fantastic collection of a dozen or so IWL scooters from the former East Germany. As a scooter anorak with a penchant for something different I was in my element and all over them for as long as the East Germany owners, who had ridden them from France, would put up with me!

And this is why the Isle of Wight is such a great event; scooters and riders from all over Europe with a passion for the bikes they ride, a love for the scene, and the ability to present a scooter that makes their fellow riders grin from ear to ear!

Until next time, ride safe.