In the scootering calendar, a bank holiday weekend means only one thing. A scooter rally! 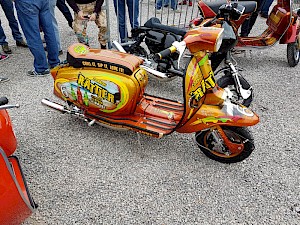 Weston Super Mare was the destination for thousands of scooterists this weekend for the second national rally of the year. The event, organised by South West Scooter Clubs was a huge success and delivered everything and more that’s expected of a national rally. Thankfully, the weather held out for the majority of the weekend even though the sky suggested otherwise at times.

The main entertainment was held at the Grand Pier, and over the weekend we were treated to bands such as ‘The Rocker Covers’ playing rockabilly versions of popular indie rock songs & ‘The Special Brew’ who are the UK’s leading 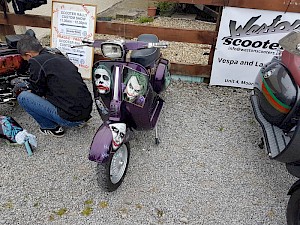 tribute band to the legendary ‘Bad Manners’. All the bands drew in the crowds who were all enjoying every second.

Lexham Insurance were once again in attendance at the trade and parts fair at Weston Rugby Club (also the main campsite for the weekend), along with familiar faces such as the Lambretta and Vespa clubs of Britain, Stockport Crusaders who as usual were selling official rally merchandise and many others bringing the best in spare parts, scooter themed art and welding and much more.

The custom show once again saw some brilliant entries with some favourites being a Fred Perry inspired Vespa PX, a Lambretta TV with heavy featuring of Amy Winehouse and an Italjet Dragster inspired by clothing Label ‘Stone Island’. The Italjet is owned by Rick Kaye and won the best auto trophy. Please take a look at the photos we have taken to see these fantastic scooters along with many others which also caught our eye.