Motorcycles and films are both synonymous with escapism and adventure, so it’s no wonder that the two are a match made in cinematic heaven. In order to discover the best motorcycle movie moments of all time we commissioned a survey of 2,000 Brits and the results are in.

The Great Escape is a Christmas classic and provides heart-stopping moment after moment. Arguably the greatest of all is Steve McQueen’s epic fence jump. During the climactic motorcycle chase, director John Sturgess let McQueen play one of the chasing German soldiers — meaning he was sort of chasing himself. While McQueen did most of the motorcycle scenes himself, it was actually friend Bud Edkins who performed the famous stunt.

Top Gun was the highest grossing film of 1986, pulling in $177 million at the box office. With the hotly anticipated sequel Top Gun: Maverick in the wings and expected for release in 2020, there’s already talk of Maverick’s new bike. In the latest instalment of the Top Gun series, we’ll see Tom Cruise on a Kawasaki, as expected. However, this time it’ll be the supercharged H2R rather than the DPZ900 cult classic from the original.

Oscar-winning animation, Wallace and Gromit: A Close Shave, comes in at third in our survey. The scene sees Wallace and Gromit take to their motorbike to save Wendoline and her sheep before their woolly friends become dog meat, literally! It’s a family favourite that will have both adults and kids on the edge of their seats. The painstaking process of using plasticine to create such a complex sequence in stop-motion has us in awe.

An 18-wheeler truck, motorcycle chase along a Los Angeles creek featuring Arnie firing a shotgun is a winning combination. Robert Patrick landed the role as T-1000, however, originally Billy Idol was pegged for the job. Unfortunately, it never came to be as Idol had to pull out of the film after injuring his leg in a motorcycle accident.

Action-adventure film, Indiana Jones and the Last Crusade was the third instalment of the Indiana Jones franchise, released in 1989. Directed by Steven Spielberg and co-written by executive producer George Lucas, the film features a motorcycle chase that was actually added post-production. After viewing a rough cut of the film, Spielberg decided the film needed more action and so the sequence was shot and added in.

Pierce Brosnan’s James Bond stunned audiences during one of the most heart-stopping motorcycle scenes Hollywood has ever seen. After stealing a BMW, he jumps the bike from one rooftop to another before clearing the spinning blades of a helicopter. Legend has it that fifteen BMW Cruiser R1200C bikes were used to capture the moment, with 12 being destroyed in the process!

Cult, indie classic, Easy Rider, was arguably the break-through film for one of the greatest actors of all time, Jack Nicholson. The counterculture masterpiece explores the societal landscape of the United States during the swinging sixties. This iconic scene sees our protagonists and their Harley-Davidson’s enjoying the freedom of the open road.

What isn’t there to like here? Chris Pratt, check. Dinosaurs, check. Triumph Scrambler, check. As far as motorcycle chases go, there are few that’ll satisfy your inner child’s thirst for excitement the way Jurassic World does. Also, if you haven’t seen Chris Pratt’s impression of a velociraptor, you need to look it up! 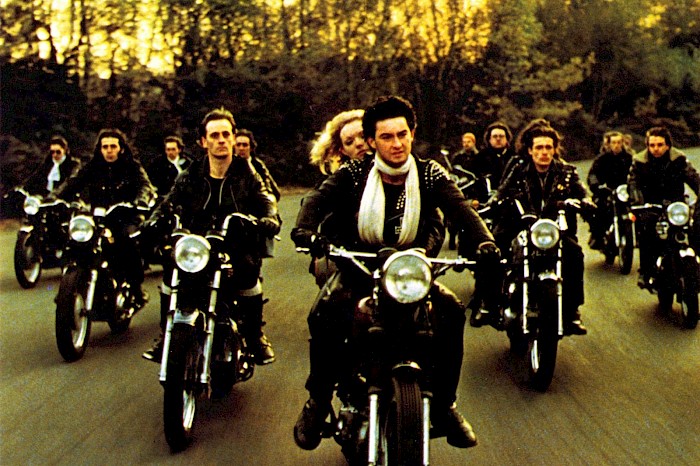 Released in 1979, Quadrophenia follows a young 1960s London-based Mod played by Phil Daniels. He escapes his dead-end job as a mailroom boy partying, riding his scooter, and taking on the motorcycle-riding Rockers. The film is a gritty and authentic representation of the two conflicting subcultures of the 60’s that inspired, transport, film, fashion and more for years to come.

The sequence featuring Audrey Hepburn riding a Vespa through the streets of Rome has become one of the most memorable movie moments of all time. It features the world’s oldest surviving Vespa and the third made by Piaggio from the “0 series”. The scooter was recently sold at auction for over a quarter of a million dollars. Not only did the film propel Hepburn to stardom, but also the Vespa itself. Over 100,000 units were sold after the film’s release in 1953.

So, there you have it, the top 10 greatest motorcycle movie scenes of all-time. Disagree with the results? Think we’ve missed a really obvious cult classic or blockbuster movie? Have your say in the comments below or on social media!