Join a soaked Geoff Hill on his adventure through the spectacular coastal roads of Ireland on his Triumph Tiger XCX. 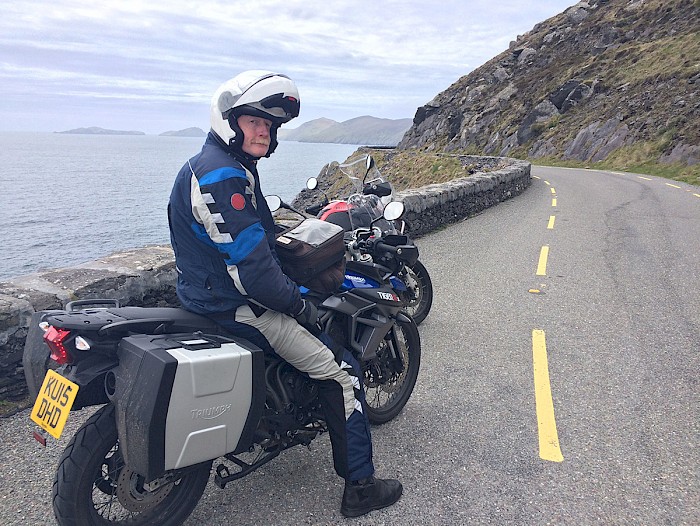 Here we join Geoff Hill, a critically acclaimed bestselling author and award-winning journalist based in Belfast with countless worldwide motorbike journeys under his belt, on an adventure on the southern coast of Ireland - a portion of which known as the Wild Atlantic Way - on his Triumph Tiger XCX Adventure bike.

On a good day, the road from Kinsale to Dingle is one of the best in the world.

But this isn’t a good day.

For a start, it’s chucking it down. And the temperature is hovering not far above freezing.

Even worse, the person in charge of packing, possibly me, has forgotten to look at the forecast on the basis that he doesn’t believe them anyway.

As a result, I set off with my trouser linings safely back in the wardrobe at home. You know, the waterproof Gore-tex ones. I hope they’re happy.

And when my biking buddy Peter Murtagh and I loaded up the bikes in Kinsale this morning, in the pouring rain. I got my head so wet that it is now steaming up my visor so that I have to ride with it open.

Soaked, frozen and with the rain needling my face, I am vaguely aware of quaint villages, ancient farmhouses, dripping woods, soaring mountains and crashing waves.

Somewhere out there is a view and beyond it New York. But, in the meantime I ride grimly on, singing “Things…can only get better” into my helmet.

As we arrive in Dingle, the sun comes out. Naturally. I get off the bike and stand there dripping as Noel O’Leary, the man from Irish Adventures, comes walking over.

“Ready for kayaking?” he says. 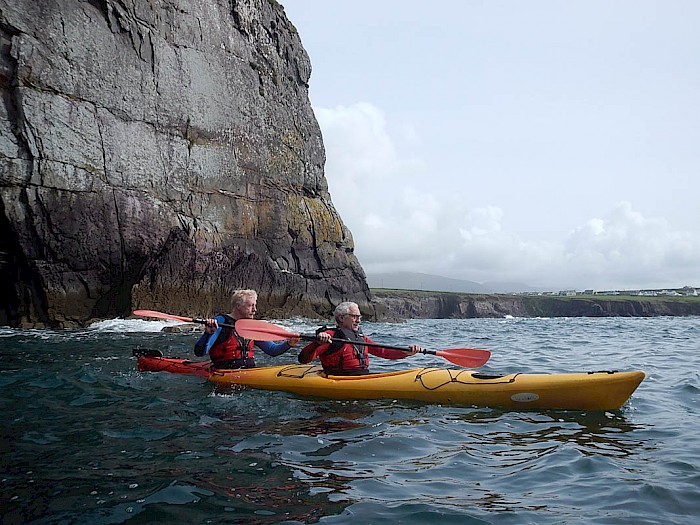 And so, after the rigours of the morning, we spend a very pleasant couple of hours paddling around in the company of a hen party from Dublin and Fungi the dolphin, leaping out of the water for us and doing a couple of backflips at no extra charge. Fabulous.

Even better, Peter and I are in a twin kayak, with him up the front, so he can’t see that he’s doing all the work while I admire the view.

“Peter, do you realise Geoff’s not paddling?” Noel calls across.

“I was having my suspicions,” mutters Peter darkly.

And so, the next day around Slea Head past the beach where Sarah Miles cavorted in Ryan’s Daughter. We pop in for a snack in Kruger’s Pub, whose walls are festooned with photos of the cast and crew, then the glorious symphony of curves and dips over the Conor Pass to the ferry from Tarbert to Killimer.

Strange, even riding of a 20-minute boat trip feels like an adventure to other lands, as we ride past Kilkee’s ornate and flamboyantly painted Stella Maris Hotel in Kilkee and on to Doolin for the night.

Hurrah for the Germans and Dutch who brought imagination and tins of paint decades ago, and ended the dreary habit of leaving buildings here grey under a matching sky. 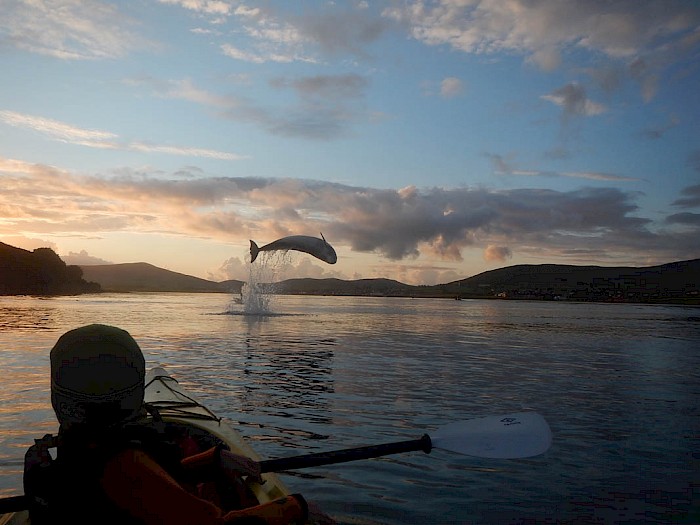 Naturally, as we arrive in Doolin and get off the bikes, shivering and dripping, the sun comes out again; but of course, it’s only mocking us. Which is why the next morning I find myself halfway up a cliff face in the rain, in biking gear, with Brian Bateson from Lahinch Adventures encouraging me to go just a bit higher.

“Geoff, there’s a good foothold to your left,” he says encouragingly.

“What, you mean that sliver of rock the size of a toothbrush?” I say disbelievingly.

We ride on, through the moonscape of the Burren, and if you think it’s bleak in sunshine, you want to see it in pouring rain.

At one point I see dripping signs emerge from the murk promising the various delights of perfumiers and chocolatiers. An image I must be hallucinating due to continuous organic waterboarding.

Even so, the brooding magnificence of slopes, woods, lakes and waterfalls of the Delphi Gap and the road running around Doo Lough is breathtaking. Despite the weather.

By teatime, we are in Belmullet in northern Mayo, where the cheery receptionist utters the most beautiful words a woman has ever said to me. 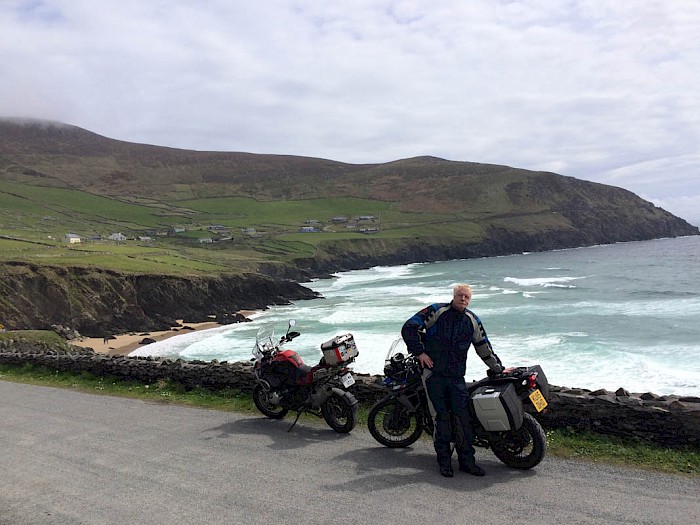 Warm and dry, we emerge the next morning to find a howling gale, which has at least blown the torrential rain away, hopefully, to somewhere useful like the Sahara.

Blown from pillar to post and back again, we ride to Strandhill and find ourselves soaking again. Although thankfully, this time, in a seaweed bath at Voya, which started as a tiny family business by Neil Walton 15 years ago. Now Voya exports its products to 42 countries where customers are rejuvenated by the iodine and alginate gel derived from bladderwrack.

If you need any details, there’s a 24-hour kelpline. Get it?

Emerging feeling like we’d been spring cleaned, we ride on recharged to Rossnowlagh. Where I’d spent family holidays as a child in a damp caravan in the corner of a field, listening to the rain patter on the roof and playing Monopoly and Spot the Earwig.

This time around, things are a lot better, staying at the grand Sandhouse Hotel and eating in the cosy and busy Smuggler’s Creek.

Sitting there as the sun goes down, I look down at the beach where my sisters and I built sandcastles as children. I raise a glass to our tiny, imagined selves, and wonder where all the years have gone.

Washed away by rain, I imagine. 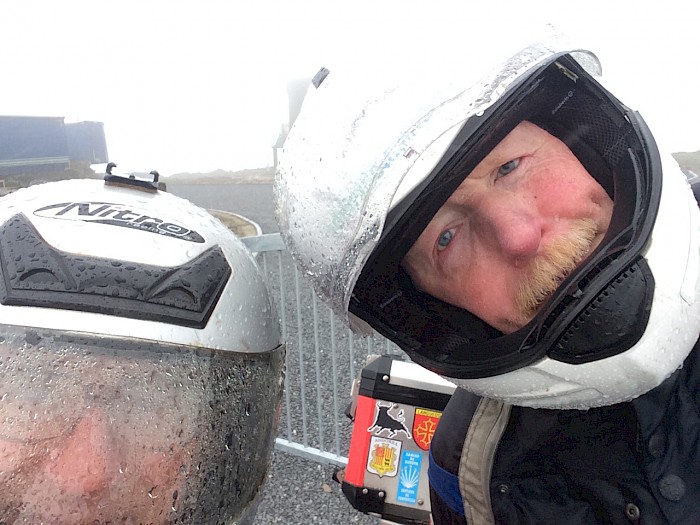 If you want to do the entire Wild Atlantic Way from Kinsale to Malin Head in Donegal, say goodbye to the cat for a while: including all the squiggly bits, it’s a whopping 2500kms (1553 miles), making it the longest coastal road in the world. However, both the main routes and side ones are brilliantly signposted with the inspired WAW logo, so you can take as little as five days if you mix and match routes. Details at www.discoverireland.ie and www.wildatlanticway.com. 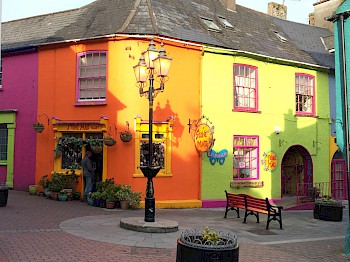 The stylish Trident Hotel in Kinsale, the sprawling Dingle Skellig Hotel in Dingle, cosy Cullinan’s Guest House with its award-winning restaurant in Doolin, the exuberantly colourful boutique Talbot Hotel in Belmullet, or the imposing beachside Sandhouse Hotel in Rossnowlagh.

Every item of clothing you possess. You may have been fooled by Discover Ireland photos of Mayo teenagers sitting outside pubs enjoying the caress of hailstones on their bare forearms, but cold and wet is no fun. Trust me. I was that idiot.

Kayaking in Dingle Bay with the friendly and erudite Noel O’Leary of Irish Adventures, while Fungi gambols around you. Tours are about three hours, including popping into and out of caves. Rock climbing with Lahinch Adventures in Doolin, or surfing with Fin McCool’s Surf School in Rossnowlagh.

The Global Village in Dingle has a tasteful interior, friendly and knowledgeable staff, and food from chef Martin Bealin better than I’ve eaten in Michelin star restaurants. 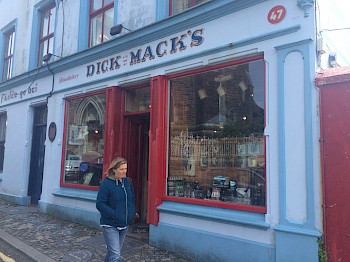 Try the €50 per person five-course taster menu, and stand by for an exquisite treat washed down by a bottle from a well-chosen and eclectic list.

In Dingle, pop into Dick Mack’s, a former spirit grocer’s dating from 1899 and now a tiny pub outside which the name plaques in the pavement show that everyone from Julia Roberts and Dolly Parton and Robert Mitchum called in to have a pint or try the astonishing selection of Irish whiskies behind the bar.

An introduction to Geoff Hill 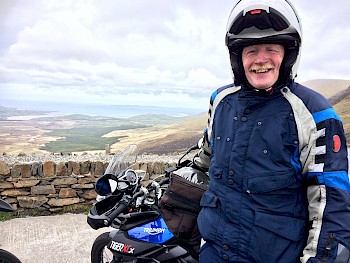 Geoff Hill is a seasoned adventurer, regularly travelling the globe on a bike in search of stories and thrills - it's something you could say he does quite well at, as he has won multiple national and international awards for feature and travel writing, as well as being a critically acclaimed bestselling author and award-winning journalist based in Belfast.

As motorbike columnist for a series of national UK and Irish newspapers, he has also recently found himself one of the most widely read bike columnists in the UK and Ireland.

Geoff is the author of 15 books, including accounts of epic motorbike journeys from Delhi to Belfast and Route 66 (Way to Go), Chile to Alaska (The Road to Gobblers Knob), around Australia (Oz) and most recently In Clancy’s Boots, recreating the journey of Carl Stearns Clancy, the first person to take a motorbike around the world 100 years ago – complete with Clancy’s original boots!

On this journey, Geoff was on his trusty Triumph Tiger 800 XCX, a bike he truly loves.

Be sure to check out the stunning photos in our gallery below!