There is definitely plenty of fun to be had at the Cycle Show and one of the biggest highlights for us on the trade day was the Ebike Test Track. 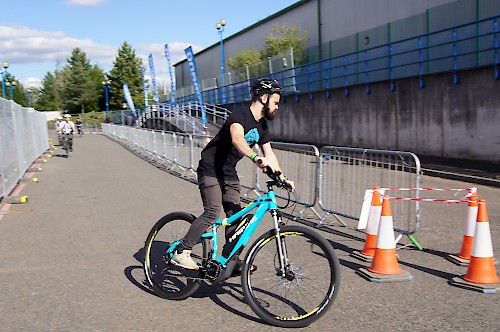 Testing state of the art new models on the track was superb fun and it's a great opportunity for those cyclists seriously interested or just wanting to try out of curiosity. If you are one of the thousands of visitors set to attend the NEC for the Cycle Show this weekend, then I urge you to give it a go - you won't regret it. Simply head on over to the desk at the ebike track and the pleasant staff with take details, ID and will then provide you with a safety helmet. Once the safety helmet is securely in place you then stroll along the walk way with a large selection of ebikes to either side of you, see one you like then speak to one of the representatives for that manufacturer who will explain how it works. Once happy, on your way you go to test on the track - where you can peddle around at your own speed and play with all the different power settings.

While there we tested a few ourselves even including the Urban Arrow family which is a rather unique Cargo bike, where I put faith in my colleague as he peddled me around whilst I did my best ET impression in the large front box/basket, this was quite a daunting experience to start but once moving produced plenty of laughs for ourselves and other cyclists at the time. I was someone who had never ridden an Ebike before and really didn't know what to expect, however, I was soon won over, and so it appeared were many others. On the track at the same time as us were a complete mixture of ages, from an elderly gentlemen who enjoyed the electric assistance at a normal pace to a young lad who was testing out a large variety of bikes to the max, you can really see how ebikes could benefit so many different people.

Onto the bikes we tried and we delibrately went for a mix... 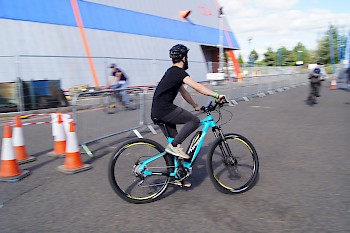 The Haibike range are mainly designed for the Mountain Bike market and the HardNine Sduro which we tested definitely fell into this category. With their unique frame shape and modern colour styling these bikes really are aimed at the younger market who enjoy the extremes of mountain biking. The Haibike are pretty high spec, so aren't the cheapest ebikes to buy, but then you get what you pay for and you can notice the quality when taking the Haibike for a ride, and you can tell by how smooth the power transfered from the motor that this was a quality machine. Being designed for off-road fun, the Haibike absolutely loved the ramp on the track and thanks to the thick off-road tyres felt as safe as houses. 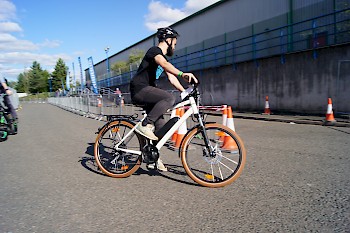 Batribike really do have a bicycle for everyone, so definitely a stand to check out and the staff couldn't be any more helpful assisting me choose a bike and then how to operate the controls. It was the Batribike Alpha in White Shadow that I put through it's paces, with its sleek, simple yet modern design the Alpha is an attractive bike, without being over the top. New for the 2017 season and retailing at £1499 the Alpha is surely to become a big seller, with a 250w motor at the rear and 5 level LED display the Alpha really does pack value for money. On the track the performance was solid and I enjoyed a good few laps on level 5 pushing the bike and myself as fast as I could safely do so on the small track and I thoroughly enjoyed myself. 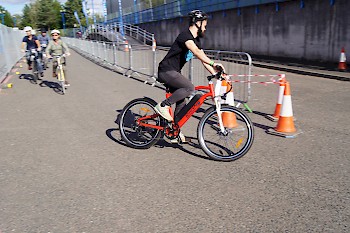 The Roodog Striker weighs only 19.9kg with battery and with its striking red paintwork and white zoom suspension, it again will appeal to people of all ages with its modern design that isn't too over powering. At £999 the Striker is a decent spec bike at an entry level price, on the track I was suprised just how good a bike you could get for the price, it was nice to handle and the electric power assitance was delivered well and you felt completely in control at all times whether riding slowly or full pace. 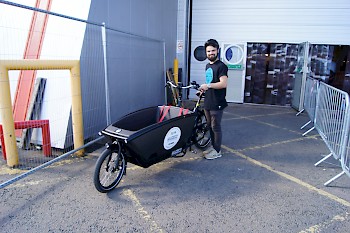 The Urban Arrow Family is a bike with a difference and you can understand how a bike this developed came out of a cycle friendly country such as Holland. Though the front box is designed with children in mind I elected to test the ride at the front while my bearded colleague was the hard working rider in control of our fate. Deciding that we better be safe than sorry we made a steady start, and after a lap of getting used to the movement and controls of the bike you soon become much more confident in the bikes ability, even though the ends of the course were a bit tight, with the slowly slowly approach we managed to successfully navigate the course without any problems. There has been a lot of effort gone into the design of the bike not just usability but safety also and this you can tell once you have enjoyed taking it for a ride, far from a novelty the Urban Arrow Family has been built for a purpose, and once you have become confident with how it performs, you can see why in cycle friendly enviroments this would appeal.

Stayed tuned next week for more blogs and photos from the Cycle Show.