Chile to Alaska on the Pan-American Highway - Geoff Hill

This plan had begun two years earlier when I picked up a copy of The Adventure Motorbiking Handbook by Chris Scott. I had accidentally (or perhaps fortuitously) opened it at the section on the Pan-American Highway stretching from Quellón in Chile, all the way up to Fairbanks in Alaska - and at 16,500 miles is the world's longest road. It sounded brilliant.

I see Ewan McGregor and Charley Boorman are now thinking of doing Long Way Up, from the bottom of South America to the top of Alaska.

In truth, they’ve been thinking of it for some time. About 11 years ago, after they’d done Long Way Down, a BBC Radio presenter asked Charley what their next adventure was, and Charley said probably the Pan-American Highway from Chile to Alaska.

“Too late. Geoff Hill’s already done it for The Road to Gobblers Knob. Great book. You should read it,” said the presenter.

Naturally, I’m too modest to mention the story, but I have offered Charley a copy so he and Ewan can do some research for a change – and have a laugh, since of all my bike adventure books, it’s the one readers always tell me is their favourite.

In the meantime, I can offer them the dynamic duo valuable advice.

A few tips and tricks for budding adventure riders...

Don’t listen to people who tell you you’ll be constantly hassled for bribes by traffic cops or soldiers. We were regularly stopped by both, but they were just curious about where we were from, where we were going, how fast the bikes were, and if we were mad. (Yes, since you ask).

All the way through South and Central America, we were only asked for money once, when we were filling the tank on my riding buddy Clifford Paterson’s Aprilia Pegaso 650, since it had a shorter range than my Triumph Tiger 955i.

A couple of traffic cops wandered over, and Clifford asked if he could take their photo with the bikes.

They duly straightened their splendid moustaches and posed with arms crossed, then one of them said with a grin: “And now, Señores, you must pay for the photo.”

“Would a dollar be all right?” he said. 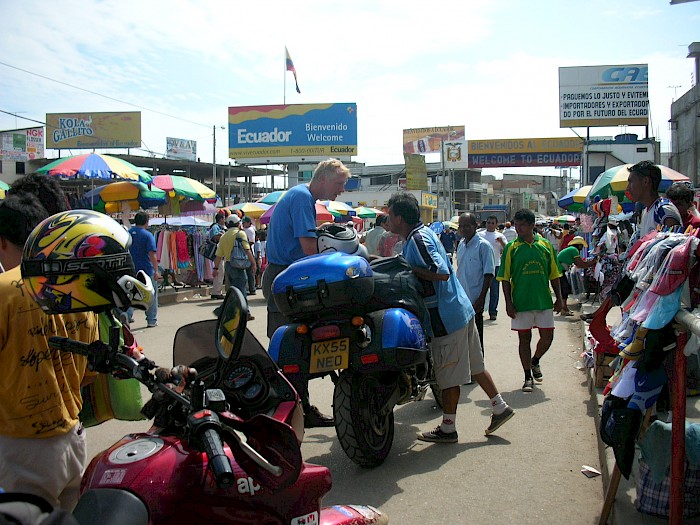 Patience is a virtue!

“Yes, but it is only a small dog,” she said plaintively.

Then you’ll be approached by their fathers, who’ll offer to get you through in double quick time for 10 dollars. It’s worth it.

Oh, and on the Panama-Costa Rica border, say hi to Humberton if he’s still there and acting as fixer. He was the brightest 14-year-old in the country back in 2006, so he may well be President by now.

But my most important piece of advice is not to fall off. It hurts. I speak as someone who found myself bouncing down the road in Colombia on my head and thinking that things were not going quite according to plan.

The plan, that is, which had begun two years earlier when I picked up a copy of The Adventure Motorbiking Handbook by Chris Scott. I had accidentally (or perhaps fortuitously) opened it at the section on the Pan-American Highway stretching from Quellón in Chile, all the way up to Fairbanks in Alaska - and at 16,500 miles is the world's longest road.

It sounded brilliant. The next day, I went out to buy every book I could on it - and found that there weren't any. Then it's about time I wrote one, I thought. 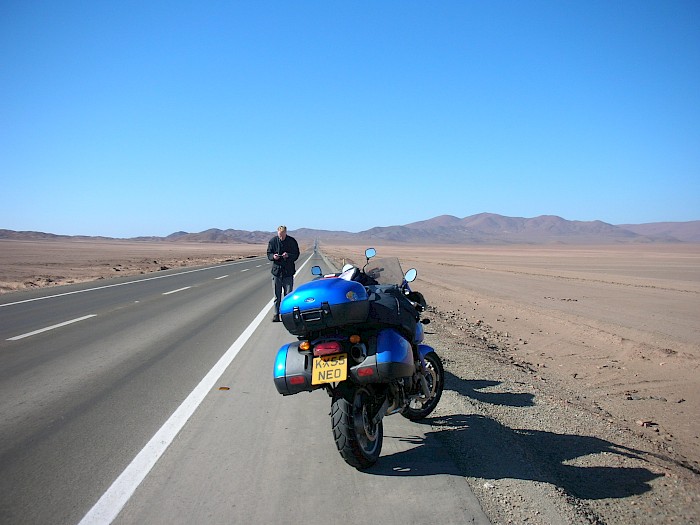 Starting off - and already facing trouble

A year later, I had found sponsorship, two motorbikes and a fellow lunatic in the shape of Clifford, a former Isle of Man TT winner who’d read my previous bike adventure books and phoned to see if he could come on my next jaunt.

As a result, two men in search of an adventure found themselves standing in Quellón with a Tiger that Triumph had foolishly lent me, and the Pegaso 650 that Clifford had borrowed from his brother. They had, naturally, been christened Tony and April. We shook hands, climbed on and rode north, soon leaving behind balmy vineyards and riding into the Atacama Desert, 2,000 of the driest miles on earth.

Just as the engine warning light came on. It was to stay on all the way through the Atacama, with the engine spluttering and stopping at nerve-wracking intervals. Finally, in Peru, we tracked down César, a back street mechanic who announced that the problem was diesel in the fuel. He refilled the tank, and started the engine. It sang without a hiccup, and the light went off, and stayed that way.

In a maelstrom of heat, noise, chaos, dust and hawkers selling everything from puppies to parrots, we passed from Peru to Ecuador, rode into an unbelievably verdant alpine landscape and came to a native roadblock. Cars burned, and the mood was ugly. We were diverted 10,000ft up a dirt road, then down the other side in slippery mud, our feet inches from a sheer drop and our hearts pounding.

Within days we were at the border with Colombia, a country that everyone had told us not to visit, or we would be kidnapped and shot.

"Is the Pan-American safe to the north?" I asked the border guard. He looked up the road, and shrugged.

"It is never safe, but whatever you do, you must get to Cali before dark. May God go with you," he said. 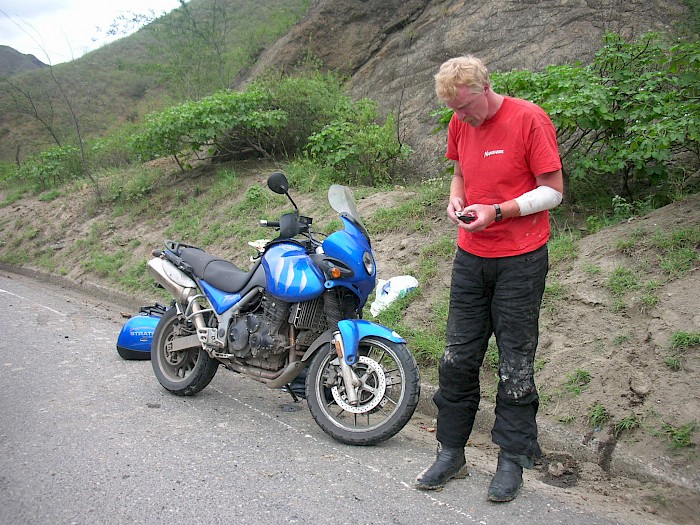 What's an adventure without some battle scars?

Late that afternoon, after riding hard all day without a break, I went into a bend too fast, braked too late, and the next thing I knew, I had adopted the rarely used horizontal motorcycling position. I got groggily to my feet with my left shoulder in agony, and most of the skin stripped off my left elbow and forearm. On my right hand, the bones of my knuckles gleamed through the blood and bits of tattered flesh.

A few yards back, Tony lay in the ditch with oil pouring from the engine, the forks twisted and the front fairing shattered. Behind was a trail of wreckage and luggage.

Within 10 minutes, the police had arrived and loaded me and the bike into a truck and we were hurtling north to Cali, where Clifford had friends of friends. They tended my wounds and phoned the local bike shop, which took away the shattered Triumph and returned, miraculously, with it bent and hammered back into shape.

A week later, still bruised and battered, I rode behind Clifford into Cartagena, the medieval walled city on the Caribbean coast, where because of the 82-mile gap in the road between Colombia and Panama, the bikes had to be shipped by boat to Colón on the north coast of Panama, the world’s most aptly named town.

The buildings are derelict, the streets full of rubble, teenagers roam around with Uzis, armed robbery in broad daylight no longer even merits a mention in the local paper, and visitors are routinely mugged within a minute of arriving.

Fortunately, we found a taxi within 59 seconds of stepping off the bus from Panama City, and walked into the grimy lobby of the Hotel Internacional to be met by a stunned silence from the locals. We were, I imagined, that year's tourists.

Making our way through the United States and in to Canada

Three days later, we finally got the bikes out of customs, and rode west through countries which were so small that we spent three hours at the border getting into Honduras, an hour riding across the country, and three hours getting out.

As opposed to Mexico, so vast that it was a week before we crossed the border into the United States, a smile on my face as wide as Fifth Avenue and exactly the same feeling in my heart, I imagined, as every dusty refugee who has entered this promised land.

With Tony leaking oil from his damaged engine and April held together with wire and gaffer tape, we limped into San Diego, where the bikes were due for a much-needed service.

Tony, according to Alex the mechanic at Rocket Motorcycles, was a two-week repair job, but he had the bike ready the next day, and we rode north to Canada with lakes and rivers still petrified by the icy grasp of winter, our only companions the bison, bear and wolves we saw strolling unconcernedly across the road in front of us.

Clifford was to miss the end of the journey, as he had run out of time and had to go back to work. We crossed the border into Alaska and got off the bikes outside an abandoned log cabin, uncertain what to do or say.

"And you, my friend," he said, and we shook hands. I stood there and watched him disappear into the distance, and then, without warning, I felt tears trickling down my face. 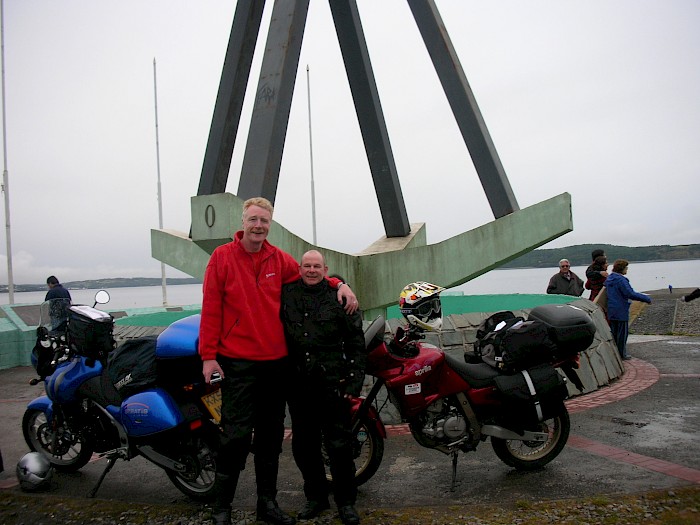 The next day, I reached Fairbanks, but I was determined to press on another 132 miles to Gobblers Knob, for no other reason than the name.

The next morning, I woke at five, and set off again up a road of mud and gravel through desolate, frozen tundra. After several hours, I reached the Arctic Circle, then finally found myself at Gobblers Knob, with a raven sitting on a rock looking at me in that arch way that ravens do.

I looked out across the endless miles of solitude as the wind howled like the lost souls of wolves, feeling in my heart that I had, at last, reached the end of the longest and most difficult journey of my life.

And then I said goodbye to the raven, climbed on my motorcycle, and rode south for the first time in a long time. It was the morning of my 50th birthday, and I was going home to the woman I loved.

The Road to Gobblers Knob, Geoff Hill’s best-selling book on riding from Chile to Alaska, is £9.99 paperback or £3.79 on Kindle.

Make sure you check out the amazing photos from the trip in our gallery below!

Fancy it? Here's how to do it yourself:

If you’ve got five months to spare, Globebusters’ 24,000-mile Alaska to Argentina expedition from July to December 2020 is £32,995 per person sharing.

If you’re going it alone, Horizons Unlimited and Chris Scott’s Adventure Motorcycling Handbook (£10.87 from amazon.co.uk), are great sources of information.

If you've got an adventure bike then we've got the insurance for you, and will include cover in the EU as standard - all of our best deals are direct, so call us on 01379 646 504 or quote online today.