Back in May last year Lexham set out to discover the community's most beloved classic scooter. Over the last 7 months we've pit a comprehensive list of classic machines (helped put together by scooter journalist Andy Gillard) head to head in a series of online polls in which you vote for the winners! 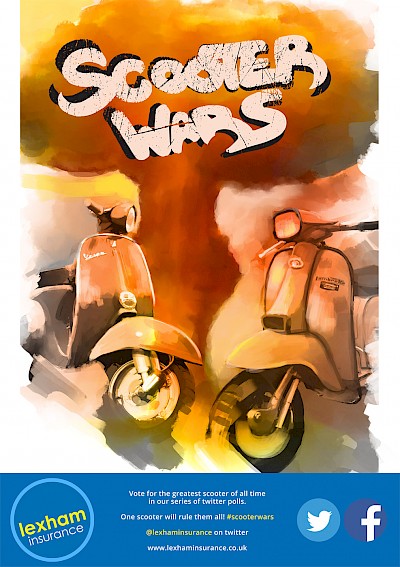 The Scooterwars polls saw a wide variety of scooters go head to head, from lesser known gems like the Panther Princess to famous icons like the Vespa PX. We tried to cover every base and people certainly let us know their opinions!

The tournament took place over a series of 8 heats where the winner of each 'battle' would go on to the next round while the losers exit the competition. The initial pool of 26 classic models was boiled down to just 8. Although the list was comprehensive we said a sad farewell to scooters such as the MaicoLetta 250, LML Star 125 and the Moto Rumi 125 twin as only two very familiar names remained. From this point on it was Vespa vs Lambretta.

The second round saw some upsets as favourites like the Vespa PX 125, Lambretta Li 150 and GP200 all bowed out. Due to a rare tie in one of the heats we were left with 5 last classic scooters in our semi-final: the Lambretta sx200, Vespa ss90, Lambretta tv175, Vespa 98 and Vespa PX200. Two more polls saw our finalists emerge.

From 26 classics to just 2, with a series of 14 online polls over 7 months, it could only come down to this: it's Vespa vs Lambretta. 200c vs 200cc. The Lambretta SX200 vs the Vespa PX200. Which is the nation's most beloved scooter? It's down to you to decide this week in the Scooterwars grand final!

To take part and have your say follow us over on twitter and vote in our poll starting Wednesday 24th January. If you disagree with the outcomes or think other classic scooters were more deserving winners we'd love to hear, let us know on social media!