Eight months ago Lexham Insurance set out to find the most beloved classic scooter in existence with a series of online polls.

With the help of scooter journalist Andy Gillard, we put together a comprehensive list of classic models and pitted them against each other tournament style until one remained, One scooter to rule them all. Except it turned out there would be two scooters to rule them all...

Throughout the competition, unsurprisingly, it was always Vespa and Lambretta neck and neck and in the grand final it came down to two iconic models. The Lambretta SX 200 against the Vespa PX 200 and after some debate, friendly banter and a lot of voting it seems the community was split right down the middle and the result was a tie. We just couldn't choose between the two legendary scooters!

These being two of the most famous names in scooter production, Vespa and Lambretta. Both 200cc variations, further indicating the UK's traditional preference for the larger sized classic scooters. Each represents the defining scooter of its generation, both iconic in mod culture. It's really no surprise they couldn't be pulled apart. So let's have a closer look at our Scooterwars champions...

It's difficult to talk about the Lambretta SX200 or the Vespa PX 200 without first talking about the modernist movement that began in the late 1950's in London. The mod scene continued throughout the 1960's and encompassed a keen interest in music and fashion. The scooter was a natural extension of early modernist's passion for Italian designer fashion, leading to an interest in Italian modes of transport which were affordable, economical and practical, which themselves became a cultural and stylistic statement.

Some experts have stated that the evolution of mod culture lead to several distinct sub-scenes forming with the term 'mod' covering all of them, but the scooter is a shared trademark and one of the key icons of the movement. Despite notorious clashes with rival cultures early on, by the mid 60's the mod scene came to represent all that was new and cutting edge and became more prevalent throughout the youth of society. 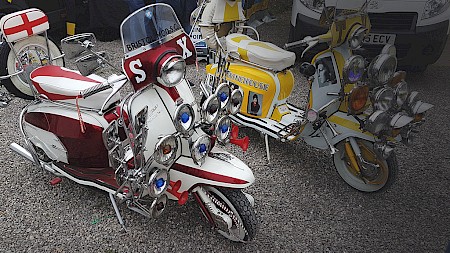 The Lambretta SX200 was produced in the very height of the mod boom with the first units arriving in 1966. At a time when scooter and motorcycle sales were generally in decline globally, this model was designed from the ground up clearly with the British market in mind and most of the models manufactured ended up here. While in Italy the SX came in white and red only, recognising the mod's love of customising their scooters as a fashion statement, in Britain the scooter came with a variety of colour options on the panelling and seat covers. Another common practice among mods was to have parts coated in reflective chrome, the SX200 was designed with this in mind featuring a new chrome grille on the horn casting as well as a chrome flash along the front mudguard.

The engine of the SX200 was the most powerful of the Innocenti line, just beating the previous TV model to reach 11bhp with a top speed of 66mph and 93mpg, a level of economic value most modern commuters still struggle to achieve.

Production of the Lambretta SX200 ran until 1969 where it was decided the cost was simply too high to maintain but over 20 thousand models were built during that time and it remains a highly sought after classic. At the time production ceased, mod culture was already in decline as the original mods were growing up, starting families and the youth began to move more towards psychedelic and hippie fashion.

The Lambretta SX200 came at the very height of Mod culture and was the top of the Innocenti line, representing the very pinnacle of scooters of its era and is still fondly remembered by the original generation of mods and revivalists alike. It's no wonder it made the final of our classic scooter contest and makes a very worthy champion. 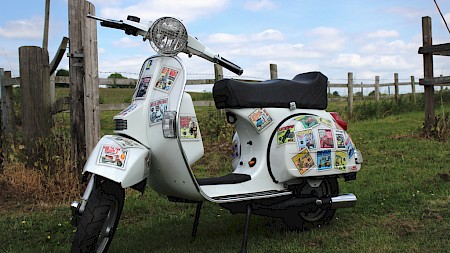 Just like the SX200 our other champion, Vespa's PX 200 is irreversibly tied to fashion and culture. In the late 1970s a mod revival bloomed, inspired by mod influenced bands such as the Jam and the seminal film Quadrophenia based on The Who's rock opera of the same name. A whole new generation fell in love with mod culture and with it Italian scooters.

While the Lambretta SX200 represented the pinnacle of scooters for the original mods, this new revival had its own icon. The Vespa PX200 was first unveiled in 1977 in Milan featuring a cutting edge new design as well as other advancements like two drum brakes, a single cylinder engine, steel chassis and electronic ignition. Originally called the Vespa P 200 E it was renamed PX 200 E in 1982 and retained that name during its production all the way until 1997 where a new version simply called PX 200 ran from 1998- 2001.

Although the PX 125 outlived its bigger brother and was only finally killed off by the recent euro 4 regulations it seems Britain's love of classic 200cc machines endures as the PX125 fell by the wayside in our polls and the 200cc version was crowned the joint winner. You would be hard pressed to find a more iconic scooter produced in the last 30 years.

It seems almost poetic that these two scooters, the defining machines of two different eras, should make it head to head in the grand final of Scooterwars and then come to a draw as equal numbers of classic enthusiasts supported both scooters!

It's been a fun contest and here's to our two champions, the classic scooters to rule them all - the Lambretta SX 200 and the Vespa PX 200!

If you have a different opinion we'd love to hear from you on our social media, get involved in the debate and let us know your favourite scooters classic or otherwise.

Lexham insurance are specialists in classic and modern 2-wheel insurance, if you need a quotation for any of these classic models why not get a quote online or contact our team direct for a policy tailor made for you!