It’s a sad fact of life in that there will always be people out there who think they have a God-given right to take whatever they want, from whoever they want, whenever they like.

With regards to scooters, the first and most obvious line of defence against scumbags is to do your utmost so that they can’t steal the scooter you’ve worked long and hard to pay for. For this you will ideally need to invest in a secure home for your scooter at night, as well as some heavy duty locks and chains to secure it to an immoveable object. If an alarm and vehicle tracker are also in your price range, then seriously consider those too and remember, many insurance companies offer discounts for using such security devices.

The other thing you can do is make your scooter less desirable to steal so that if it does go missing, the odds are stacked in the police’s favour if anyone gets caught in possession of stolen property. When doing this, remember that a thief is either likely to change the scooter’s identity and try to sell it to an unsuspecting buyer as a legitimate bike, or strip it apart and sell the bits off individually. As a rule, a vehicle has two main points of identification beyond the number plate: the frame number and the engine number. If a thieve gets rid of those, then it becomes much harder to prove anything remaining in their possession are stolen. After all, one white Lambretta side panel or Gilera Runner screen looks like any other, right? 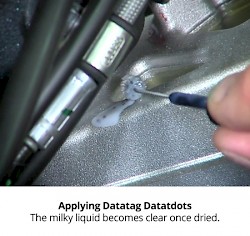 Well yes, unless the owner had been clever enough to apply some security-marking to the parts. In the very basic form, you could simply scratch your name or postcode into all of your scooter’s parts. The next level is to buy a kit from one of the numerous companies out there that offer professional marking systems that can be logged onto national databases. These include AlphaDot, SelectaMark, SmartWater and Datatag who all offer a broadly similar range of features, some better than others.

I chose Datatag when rebuilding an old Lambretta.

Their electronic anti-theft system consists of tiny transponders that are hidden in your scooter, as well as microdots and other identification technology. This multi-layered identification system enables the Police to identify the true owner of any Datatagged scooter – or component scooter part -– even if the official identification numbers have been altered or removed.

Datatag have issued Police forces throughout the UK with special detecting equipment to read parts which have been Datatagged, and so the goal of tagging is twofold, thus not only helping a victim be reunited with their stolen property, but also by providing evidence against the thief. 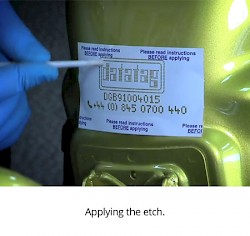 I used the Datatag kit to discreetly tag each and every part in such a way that it is very difficult indeed to remove them all. Remember, it takes just one to get a result and indeed Datatag tell us they have a fantastic success rate and that criminals are well aware that the CPS has never lost a court case in which Datatag has been used in evidence.

This means that a Datatagged scooter is far less appealing to a thief. Even stealing your side panels can land them in prison.

The Datatag Small-Powered Two-Wheeler System includes two transponders (the size of a grain of rice), 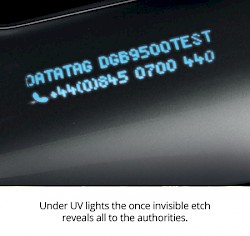 some stencils, stickers, marking fluid and around 1000 Datadots in the Forensic DNA liquid. All identifying parts are unique to each kit, and therefore your scooter. The instructions tell you how to apply all of this, all of it subtle enough so as not to ruin your scooter’s overall appearance, although the warning stickers do need to be obvious as a deterrent to would-be thieves.

Do test the stencils in an unseen area first in case they affect the paint, as it did on one part of my scooter. Datatag also suggest having at least one etch externally on the scooter so that if a policeman stops a bike and becomes suspicious, then a quick wave of his UV light will reveal all.

After registering your scooter with Datatag, should your scooter be stolen inform the police as usual adding that it is Datatagged.

Datatag stays with the scooter for life and is transferrable to a new owner (for a small fee) but has no annual subscription. Available from all good scooter and motorcycle dealers for £59.99, it’s well worth thinking about as an added line of defence for your scooter.