Out of sight, out of mind? Winter is a time where your machine may not be used as often as normal so it’s a sitting target for thieves. Aside from your usual security arrangements here’s a couple of tracking options to consider 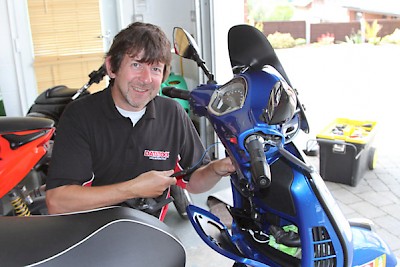 Most riders won’t think twice about spending up to £500 on an aftermarket exhaust but won’t even consider spending less than that to secure their pride and joy. You should all (at the very least) use an approved lock and chain to secure your scooter wherever you park your machine but how about going for some extra protection?

A tracker offers the best chance of vehicle recovery if you are one of the growing number of victims of bike theft. In London the Vespa GTS has replaced the old two stroke Gilera Runner as the number one choice for light-fingered low life’s. GTS’s are being stolen on a very regular basis (prompting Piaggio UK to look into additional security), one person we know of had his brand new scooter stolen from a locked underground car park at his apartment block…just seven hours after he picked it up from the shop. The thieves were seen on CCTV and actually used a fire brigade master key to enter the car park. A tracker could have prevented that scooter from becoming another statistic and may have seen the thieves caught red handed.

Personally I’m very security conscious, my brick built garage is alarmed, covered by CCTV and I keep my machines locked up in there as well. It also has a few other security measures in place but that doesn’t mean I’m complacent. Earlier this year I had a Datatool Trakking device fitted. The unit offers 24-hour protection, is monitored remotely and sends a text/email alert if the scooter is moved, you also get a phone call if the device is triggered and you can follow it on your mobile or PC. The Trakking is Thatcham Cat 6 approved and will pinpoint the bikes precise location if it is stolen.

You can’t fit the device yourself though but Datatool work alongside their approved fitter, Pete. You can find him on Facebook as the ‘Bike alarm man’. He’ll come and fit the device, (or supply and fit) in your own home. It takes a couple of hours on average to fit depending on your scooter/bike. The unit costs £179 plus fitting and a £99 annual subscription, so less than £400 in total for one of the best bike recovery options on the market and added peace of mind.

A cheaper alternative to the Datatool is an Oxford tracker, the cigar shaped tracker is around 10 inches long and is simple to install. It has it’s own built in lithium battery, there are no wires and all you have to do is find somewhere to hide it on your machine. That is easier said than done on some bikes, especially as it’s better not to be mounted close to metal but most owners can find somewhere to stash it beneath the bodywork or under the frame. Obviously the size of the tracker is a bit of a downside because it makes it hard to hide but unless a thief found it quickly, or knew what it was if they did you might still have a chance to get your bike back. The basic unit has a claimed ten year battery life and costs £199, the Spy costs £219.99 and can be mounted using its strong magnets, finally the External costs £239.99 and has an external antenna so the device can be mounted inside a frame tube, making it a good choice for classic scooters built from steel. A subscription costs from £3 per month and like the Datatool there’s an app to let you keep your eye on your bike.