Scooter Rallies - What Made the 80s Scene so Special?

Although scooters were massively popular in the 1960s, and continued to be fashionable into the 90s and beyond, it’s fair to say that there was a peak in the 1980s.
During that period there were many vibrant music subcultures which shaped the scootering generation.

The 1970s music scene is maligned by many people, with glam rock and disco not being top of many people’s lists. But that decade also gave us punk, new wave and the birth of the 2-Tone movement, whose influence is still felt on the scene both in the choice of music played by DJs and the bands who play live on rallies.

Groups such as The Clash and Stiff Little Fingers are still as popular as ever, as are The Jam who surfed the punk scene to spearhead the mod revival. The release of Quadrophenia was a catalyst for a 60s reboot which favoured groups such as Nine Below Zero, The Chords and Secret Affair.

The Foundations of the Scooter Rally Scene as we Know it

The 2-Tone record label was founded in Coventry by Jerry Dammers from The Specials, and they were soon joined by The Selecter, The Beat, Madness and The Bodysnatchers.

The fusion of ska and punk was a hit with scooterists, but old school ska was also popular, with songs like 'Liquidator' by Harry J and the Allstars, and 'Return To Django' by The Upsetters being played regularly on rallies.

As the national rally scene grew in the early part of the 1980s, the entertainment on offer mainly comprised allnighters and lunchtime dos. These were very northern soul-focused affairs, with the popular Keeping The Faith and Out On The Floor albums to be found in many scooterists’ record cases. The live acts reflected this bias too, with regulars including Jimmy James and the Vagabonds, Edwin Starr and J J Barnes.

Popular northern soul songs around that time included 'Competition Ain’t Nothing' by Little Carl Carlton, 'He’s Coming Home' by Beverley Ann, 'Just Like Romeo and Juliet' by the Reflections and the 80s rally classic, 'Interplay' by Derek and Ray.

There were also ska compilation albums in scooterists’ collections, some on the Trojan label but one which was also popular was 20 Reggae Classics (Volume 2). It included a raft of songs which were regularly played on rallies, including '54-46 Was My Number' by the Maytals, 'Double Barrel' by Dave And Ansell Collins and 'Israelites' by Desmond Dekker & The Aces. Dekker was a regular live performer at rallies throughout the decade, including Great Yarmouth, Donnington and the Isle Of Wight.

The charts of the early to mid 1980s included many acts who were popular on the scooter scene. There was the mod-influenced Secret Affair, the soul-inspired Dexy’s Midnight Runners, plus the Fine Young Cannibals, JoBoxers and The Untouchables. All these bands still hold their own today, producing perfect pop songs which have stood the test of time.

Although northern soul and ska were popular, there was also a huge appetite for alternative music. A new collective was formed in 1984 by Nick Jolly and Kev Lowe, with a music policy which played anything which wasn’t played in the mainstream dos. The VFM, as they were known, were proud to only own one northern soul record!

They played a real mixture of music, from The Cramps and King Kurt to The Smiths and The Cult. Dance music by bands such as New Order would be played alongside punk and new wave classics. 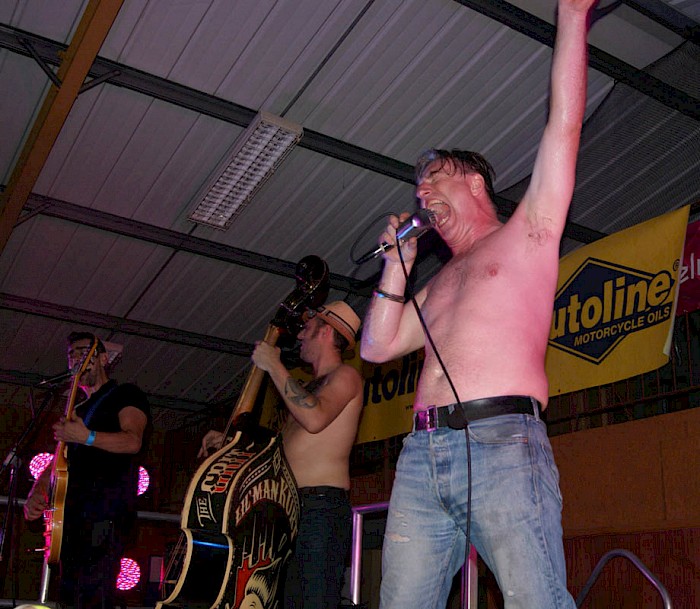 Alternative Artists and the Psychobilly Scene

The taste for alternative music was also reflected in the bands who played from the mid 80s onwards. DISC 85, the massive scooter event at Donnington, included The Meteors and Bad Manners in its lineup, and there was the famous King Kurt performance at the Isle of Wight in 1986.

The psychobilly scene really took off with bands like Guana Batz, the Highliners and the Long Tall Texans regularly seen on the gigging circuit. The Stomping At The Klub Foot albums were really popular, featuring live performances recorded at the iconic psychobilly venue in Hammersmith, London.

Spear Of Destiny’s 'Liberator' was a massive rally tune, a perfect song to wreck to in a sweaty moshpit. The same can be said for 'Should I Stay Or Should I Go' by The Clash, and even 'Nellie The Elephant' by the Toy Dolls.

Many DJs tried to avoid the more ‘energetic’ tracks which were likely to inspire a wrecking session but this didn’t deter the drunken hoards of scooterboys who would wreck to anything, including 'Shout' by Lulu! As the decade drew to a close there was a new wave of music filtering into the scooter scene. The raw rave sounds of The Prodigy could be heard alongside bands from the Madchester scene which included The Stone Roses and Happy Mondays. The Darkside Sound System play in dedicated rooms at selected rallies and feature these bands as well as house and drum ‘n’ bass from the late 1980s and early 1990s.

It’s very hard to please all the people all of the time, and rally DJs have a tough task keeping a roomful of energetic scooterists entertained, but the best nights feature a little something from all eras and genres.

As a DJ myself, I know that if I include some of these 1980s scooter music classics in my set then I’ll keep the dancefloor busy and ensure punters are happy!

If you’d like to hear some of the songs featured in this article then here is my 80s Scooter Music playlist on YouTube.