This summer KYMCO is adding an all-new 125cc Scooter to its highly popular ‘City’ commuter range – the KYMCO City Plus 125i CBS (Euro IV).

With fresh new aesthetics and a higher technical specification than its predecessors, the all-new ‘City Plus’ has been designed for riders of all ages who want a smart modern, environmentally-friendly 125cc scooter for work, college or leisure.

In line with new Euro IV legislation, the City Plus is powered by KYMCO’s new ultra-efficient fuel injected 4-stroke air cooled engine, which can achieve in excess of 100 miles per gallon. This makes it extremely economical to run on a daily commute. It’s also spritely off the mark too and has a top speed of 65mph.

For rider safety, KYMCO has given the City Plus a new 14” rear wheel and a longer suspension for increased stability when navigating busy potholed roads. The addition of a new combined braking system also makes for a safer ride; by linking the front and rear disc brakes, the braking experience is more progressive and well-balanced.

The saddle has been ergonomically redesigned for extra comfort and to facilitate increased storage space under the seat. New folding footrests have been added too.

A nice new practical feature is the fuel cap being positioned on the front of the City Plus to make refuelling the 7 litre capacity tank even easier. 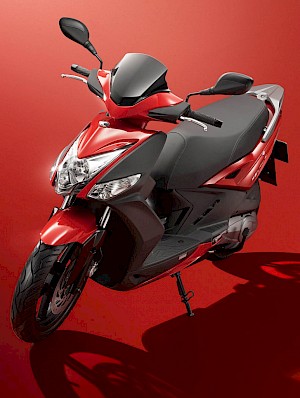 With new LED lights, a more angular design that is accentuated by its modish two-tone colourways and aluminium rims, the City Plus has been cleverly redesigned by KYMCO, to reflect the needs of modern town and city riders – performance, style and practicality.

The KYMCO City Plus 125i CBS is available in a choice of two colours – red/black or blue/black -from all UK KYMCO recognised dealers priced at just £2199 with a 2-year unlimited-mileage manufacturer’s warranty. Low-rate finance and subsidised insurance offers are also available on new models, for those with a used Kymco looking for scooter insurance, Lexham Insurance have their cheapest quotes direct.