How to improve your motorcycle riding skills #1: Five tips to keep you safe

Are you one of those riders who finds yourself having confrontations, near misses and near death experiences on the road on a regular basis? Have you ever considered there might be something you could do to help yourself? We'll be giving you a few common and not so common riding tips over the coming months.

It is your fault

I’m sorry to say it but if you get regular issues on the road then there’s every chance your riding ability, planning and awareness is letting you down. Don’t panic though, some common mistakes and bad habits are easy to sort out. Put in a bit of thought and effort and you’ll be able to improve your riding and increase your chances of living. Riding is only as dangerous as the rider makes it. Believe it or not, you’re in control of most things that happen out on the road.

Our best form of defence is not to allow an attack. That means keeping our wits about us at all times. We’re out there sharing the roads with distracted drivers, parents in a car full of screaming kids, businessman on the phone, vapers hiding in a smoke filled car. We need to be on the ball and see them before they have chance to cause us harm. We need to be able to predict what they might do and be able to react in time. There’s no point getting angry after the event, pre-empt it, have an escape route if needed and you can ride away safely feeling quite smug at your increased ability. Defensive riding is like having an imaginary force field around you, use it wisely. Don’t get mad, get smart. 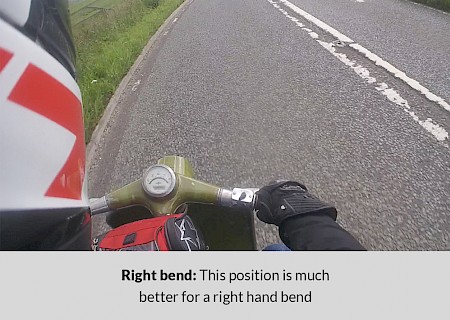 Although we’re more vulnerable on two wheels we are also very lucky because we have the ability to use much more of the road than a car driver. That increased flexibility allows us to literally see around corners and allows other road users to spot us earlier (and us to spot them).

If you’re approaching a left hand bend position yourself towards the centre line (not over it, or where you may come into contact with an approaching large vehicle), it’ll give you a better, earlier view around the corner. For a right hand bend position to the left. It’s simple but very effective, not only does it allow you a better view of what lies ahead but it means an emerging vehicle will see you earlier and as a bonus it’ll also be a quicker route through the corner. Start consciously thinking about your positioning the next time you ride. 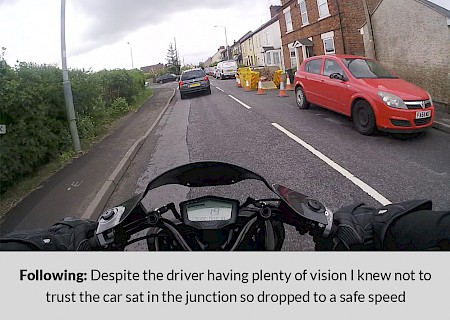 There’s nothing more likely to get you killed than being directly behind another vehicle, particularly a van or lorry. For starters you won’t be able to see what’s happening in front, just as importantly others won’t know you’re there and may well try to pull into what they think is a gap behind the vehicle you’re tailgating. Drop back. Give yourself and the vehicle in front more space, if you can see everything that’s happening in front and to the sides of the vehicle you’re following then you’ll stand a much better chance of living.

Lots of riders just focus on what is happening directly ahead, they’re fixated on the road but can often miss important things around them. Rather than having tunnel vision you should be scanning all around and using your senses. Use these snippets of info to build up a complete picture of what is happening around you. Clues like vapour from a car exhaust on a cold morning might mean a driver is about to reverse off a drive, a smell of freshly cut grass could mean there’s a slow moving tractor around the bend. You can also use clues to help you work out which way an unfamiliar road is going, or if there’s likely to be a hidden side road ahead. Use reflections in windows to help you see around a blind bend, see which way the telegraph poles go to work out how the road goes, or a line of trees behind a hedge might mean there’s a hidden side road coming up. 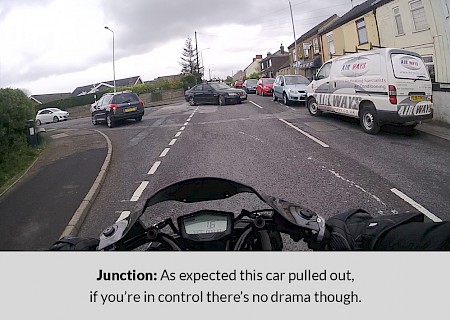 One of the most common accidents will happen at a junction as a vehicle pulls out into your path. This is probably the most important lesson to learn and you can control it. Whenever there’s a junction be aware that somebody might pull out on you. Positioning is important again, get over to the right as you approach a left hand junction and to the left for a junction on your right. Use your positioning to allow other road users to know you’re there earlier than they would if you just stuck to your usual position on the road. High-Viz won’t stop you getting hit, positioning and awareness will. If there’s a vehicle already waiting at, or coming up to a junction try to make eye contact with the driver and keep your eye on their front wheel. If the wheel begins to move it’s a good early indicator that you might be in trouble. Those extra milliseconds can save your life. Use them to react by slowing down, braking, speeding up or altering course if need be. If you can predict what another road user is going to, or is likely to do before it becomes a problem then you’re half way there. 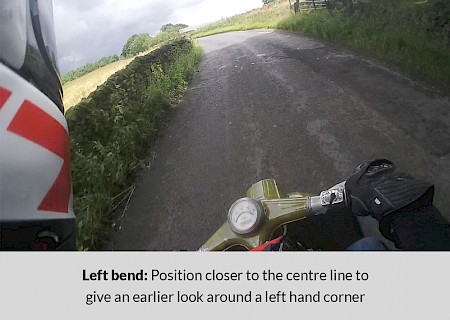 Don’t just pass a CBT, or test and think you’re fully qualified. If you love riding then you should do your best to do it more safely and learn to ride to your absolute best. In turn that will make you quicker and smoother out on the road, allowing you to enjoy it.