The rise of the three wheelers

Three wheel motorcycles aren't exactly a new invention but at the same time, we've never seen any quite like this either. What differentiates these new 3 wheel machines from traditional trikes is that they feature 2 wheels at the front and perform and handle like a traditional motorcycle but with the added stability and safety of an extra wheel.

Piaggio pioneered this new breed of 3-wheeler with the release of the MP3 about a decade ago and like most things scooter related, they seem to do very well in Europe but take a while to catch on in the UK. Fast-forward to 2018, Piaggio now have a whole range of MP3 models on offer, as well as the Fuoco released under the Gilera brand. Now we're starting to see them appear on British roads more and the Police even have some cruising about London! But what is it that makes these new three wheel scooters stand out and why should you give one a try?

Well I already mentioned the increased stability, but let’s elaborate a bit. The two front wheels each have their own independent suspension allowing the machine to lean just like any other motorcycle, offering much higher mobility than a traditional trike. The additional wheel also means more traction so it's better in the wet and even deals with bumpy, uneven surfaces (an unfortunately common problem on UK roads) much better than its 2-wheel counterparts.

A motorcycle you can ride with a car licence?

The latest versions of these 3-wheel scooters Piaggio refer to as 'Large Track' or LT for short, basically it relates to the increased distance between the two front wheels that allows them to be ridden with a car licence, meaning anybody tired of slow commuting and looking for a bit of fun can try one out. A few other features of the MP3 play their part here as well, a locking mechanism allows the bike to sit up while stationary without needing to put your feet down or use a side stand while parked. There is also a pedal brake similar to a car that will apply the brakes to all 3 wheels at the same time when pushed, as well as a separate hand brake that will hold the bike in place when standing still.

As with all things there are pros and cons to making the switch to one of these 3 wheelers. They make great commuters, with high fuel economy especially compared to a car. They are compact enough to be able to move through traffic well, but they are definitely larger and heavier than a traditional scooter which may not be everyone's cup of tea. The increased size does come with some added benefits however like a large, comfy leather seat, huge under seat storage space and ample leg room.

With all that being said let’s take a look at some of the key models available in the UK market.

The Yourban Sport 300 is Piaggio's new entry level model coming in with an on the road price tag of £6749. It has the standard features of an MP3 like the quadrilateral suspension, upright locking system, hand break and pedal break but it comes in a little lighter with a 222kg running weight. This might seem a lot compared to a 300cc scooter but the mp3 is a very different beast, in fact it's fairer to compare it to a car considering it can be ridden with a car licence as long as you're over 21. The Yourban is a more compact model so parking this thing is going to be a lot easier than a car and so is the daily commute, not to mention it's high economic performance. 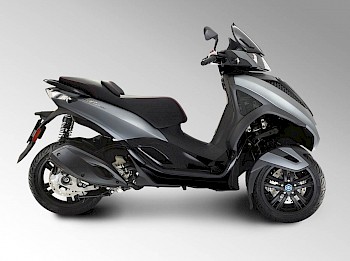 The MP3 Yourban Sport has its own unique styling with a fairing and windscreen that will do a good job blocking out the weather, combined with the stability and safety we discussed earlier it's a good fit for British conditions. Despite being more compact it still has ample under seat storage, fitting a full face helmet and more, as well as additional luggage hooks up front.

If you’re looking to try one of these modern 3-wheelers this could be a good place to start. 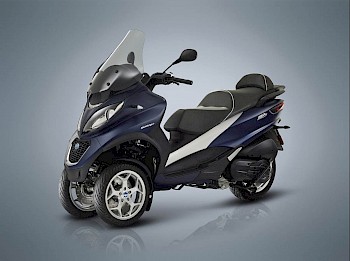 We took a look at the entry level model now let’s look at the deluxe version! Hot off the presses after being revealed last week the new MP3 500 hpe models, both 'Sport' and 'Business' versions come in at the top of the price range at £8799. But for a premium price you get a premium package with the new hpe models being improved in almost every way from their predecessors (Piaggio claims the new engine has an increase in performance of around 14% compared to the previous 500 models while actually consuming less fuel!). 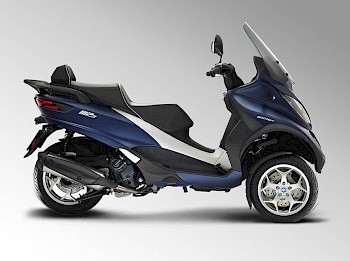 We're focusing on the Business version here and it's loaded with features - ABS as standard as well as Piaggio's ASR traction control, 'Ride by Wire' electronic acceleration system that can change the engine map with a button press and a built in Tom Tom navigation system. Add to that the large seats with backrests for rider and pillion, a newly improved smoked windscreen, ample luggage space (with an additional top box available) and the MP3 500 hpe Business is going to be a stylish and effective commuter and tourer.

The MP3 Business also comes in a 300cc version so if you’re looking for sophistication and style with a slightly smaller budget, this is a good option too. 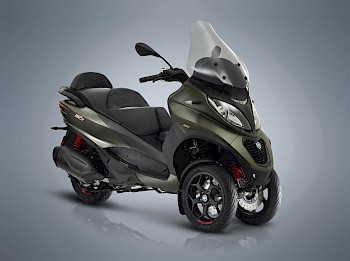 Another brand new model unveiled last week, the MP3 350 is a good middle ground between the two we've just looked at. The on the road price is £7749 and with a larger engine and power output than the 300 versions it also has improved fuel consumption over the 500's whilst keeping the same 12 litre capacity.

The visual styling on this new MP3 350 matches the hpe Sport 500 version with its new look wind-shield and front grill, matt black details and red accents. Looks aren't the only thing it takes from its bigger siblings either, with matching ABS and ASR traction control as standard. 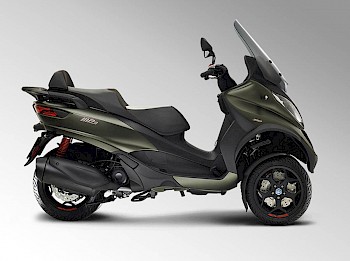 One unique feature of the MP3 350 is its engine, being the first scooter to feature an automatic multiple-disc clutch in oil bath. Technology usually only seen in motorcycles, this is a direct address to early complaints that a 3 wheeler's increased weight can be problematic upon releasing the suspension lock and pulling away if you don't get smooth acceleration. Putting a foot down to right a 256kg machine isn't the easiest thing. According to Piaggio this new technology should absorb potential jerks or jumps in transmission creating smooth stationary starts and eliminating the issue all together.

Front suspension: Articulated quadrilateral
Rear suspension: Double shock absorber with preload position adjustment
Breaking system: ABS-ASR standard
Fuel tank capacity: 12 litres
Automatic multiple-disc clutch in oil bath
I've given an overview of 3 of the key MP3 models here but visit Piaggio's website to see the entire range and locate a dealer near you for more info.
If you're looking for insurance on an MP3 Lexham Insurance is Piaggio's official insurance partner so make sure to get a quote direct for the best possible deals.