Home / Blog / Ride to Work Week: Here’s Why You Should Ditch the Car and #CommuteHappy

Ride to Work Week: Here’s Why You Should Ditch the Car and #CommuteHappy

“Fun” and “commute” are two words rarely used in the same sentence, particularly among those who drive to work.

With car commuters in the UK’s most congested cities wasting an average of 127 hours per year on the road, it’s no wonder we are stressed. Read on to find out how we can avoid traffic jams, reduce commute times and #CommuteHappy by opting to ride to work.

The cost of traffic jams 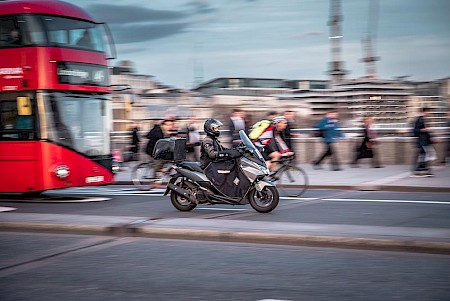 We all know sitting in gridlock can be hugely damaging for the environment as fuel consumptions rise and emissions pollute the air, but have you ever considered the pounds and pennies we are throwing away while sitting still?

The 2016 Traffic Scorecard reported London drivers spending an average of 73 hours sat in gridlock during peak times, at a cost of £1,911 to the driver in terms of fuel value and time wasted; and other cities weren’t far behind.

Two wheels is a great way to combat this. Motorcycles and scooters are able to use bus lanes in many towns and cities, allowing you to cut through stand-still traffic. By filtering through congestion they help to speed up all traffic. What’s more, most new motorcycles and scooters already meet the proposed criteria for for ultra-low emission zones.

Should we be doing more?

Our European friends have eased congestion by 3% in the past five years, while here in the UK congestion has risen by 14%! So what more should we be doing to combat our congestion levels?

The table below shows the ten worst UK cities for contributing to congestion levels. The congestion level percentage is the increase in overall traffic times compared with free flowing traffic. Top of the table is Belfast with a huge 43% congestion score, which is up 3% year on year.

Data combined from TomTom.com and TotallyMoney.com.

An annual increase in congestion levels is common in each of these cities, evidencing that more must be done to tackle congestion in many of UK’s major towns and cities. Building new roads is expensive, and while it diffuses the traffic build-up in some areas, it is not a resolution. Long term, a change of travel modes is a far better option.

It is no surprise to see that those cities with high congestion rates also appeared amongst the most stressed cities. According to the 2,000 Brits we surveyed, the majority voted taking a car to work as the most stressful way to travel. In contrast, riding to work can minimise stress and be both fun and therapeutic, and was voted the least stressful vehicle for commute. 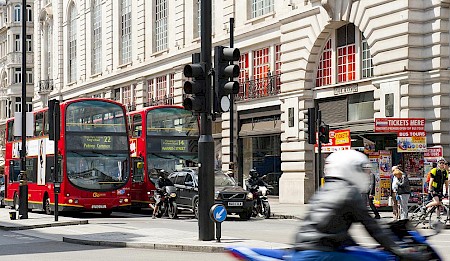 A recent article on Forbes.com highlights that motorcycle owners ride for fun, and this applies to their daily commute as well as their weekend excursions!

"Any motorcyclist will tell you that riding is a meditative activity; it forces one to focus on the task at hand and keeps your mind from wandering”, says Jon Langston, Associate Editor at Motorcycle.com.

Beyond personal pleasure, motorcycles and scooters are good for everyone during rush hour traffic. As traffic density increases, motorcycles use less space, eventually disappearing altogether between the traffic queues. So when bike or scooter riders filter through traffic they are not only saving themselves time and money, they’re also saving it for car drivers, meaning everyone arrives at their destination sooner and less stressed, ultimately resulting in a happier commute for all.

Many cars you see on your daily commute will have a single occupant, creating a severe waste of space and resource on the roads. Traffic flow and congestion would change for the better if more people commuted by scooters and motorcycles.

Beyond this, by riding to work it can be far easier to park, and in some cases cheaper too, and road skills can be improved. Piaggio believe riding your motorcycle or scooter in busy traffic conditions will enable you to become a more skillful road user.

“Drivers who also ride motorcycles or scooters are more competent. They claim less often on their car insurance and for smaller amounts.”

So do your bit, reduce congestion, and get on your bike (or scooter) for your commute this Ride to Work Week. We would love to hear from you if you’ve shaved time, money and stress off your daily work travels.