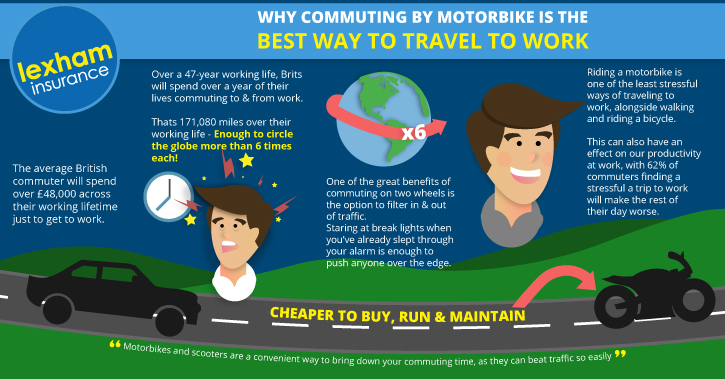 Unless you are fortunate enough to work from home, chances are you have to deal with the stresses of rush hour as part of your daily commute to work. Well, we are here to tell you about a fun alternative to sitting in traffic jams and dealing with train delays. 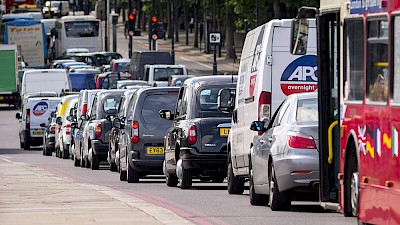 You may have visualised yourself owning a Harley Davidson as a teenager. The wind in your hair, sprawling country lanes laid out in front. But then you grow up, your own mortality is suddenly very real. You have proper responsibilities like work and children and think, “getting a motorbike now just isn’t practical.”

Here are 5 reasons why you are wrong, and why it makes perfect sense to invest in two wheels:

We recently ran a survey which found that the average British commuter will spend over £48,000 across their working lifetime – just to get to work.

Over two thirds of Brits drive, despite the spiralling costs incurred: the car itself, petrol, tax, insurance, MOT’s and maintenance. Rail fares have increased twice as much as wages and inflation over the past decade.

Motorbikes are cheaper to buy, run and maintain. In an ideal world, we’d all cycle but motorbikes can offer a good balance between speed and cost.

Over a 47-year working life, Brits will spend over a year of their lives commuting to and from work. That’s 171, 080 miles over their working life – enough to circle the globe more than six times each.

One of the great benefits of commuting on two wheels is the option to filter in and out of traffic. Staring at break lights when you’ve already slept through your alarm is enough to push anyone over the edge.

Britain’s cities have been found as the most congested in Europe. Filtering (when done safely) can not only save you time, but also helps reduce congestion as you’re in effect using no road space.

Riding a motorbike is one of the least stressful ways of traveling to work, alongside walking and riding a bicycle.

The most stressful way to travel, followed by the bus, the train and Metro or Underground systems.

This can also have an effect on our productivity at work, with 62% of commuters finding a stressful a trip to work will make the rest of their day worse.

With over 11.7 million days lost to work related stress in 2015/16, finding an alternative mode of transport could improve your stress levels, performance at work and the wider economy.

Andy Goodson, the Sales and Marketing Director for Lexham Insurance, said: “One of the best ways to make your commute happier is to cut down how long it is.

“Motorbikes and scooters are a convenient way to bring down your commuting time, as they can beat traffic so easily.

“Nobody wants to have their day made any more stressful than it needs to be – and sitting in traffic and constantly late trains definitely don’t help.”