Vespa World Days is hosted by the national Vespa club of a different country each year. This year was the turn of the Croatian Vespa Club and it sounded like an adventure not to be missed.

A group of friends, all on Vespa GTS 300’s, a fortnights holiday, 2500 miles, ten countries and some great riding.

June arrived and we headed off via the Eurotunnel into France and an overnight stop on a campsite in Ypres, Belgium. Our travels took us on to Luxembourg, Germany, Lichtenstein, into Switzerland (a stunning place to ride through) and up the Umbrail Pass to Italy where we stopped in a high altitude hotel overlooking the famous Stelvio Pass. People were skiing outside the hotel and the snow was still piled ten feet deep at the side of the road. The ride down Stelvio was out of this world, surrounded by the Alps, hundreds of hairpins, scenery to die for…

Anyway back down to earth and we rode through Italy and into Austria, a country just as pretty as you’d imagine. After Austria we were into Slovenia then a hop skip and a jump into Croatia, easy. When I say easy we were riding between 175-300 miles per day but the surroundings made up for long days in the saddle. We had two nights on a stunning little Croatian island, camping next to the beach before riding 165 miles down the best coast road I’ve ever seen to Biograd for Vespa World Days. 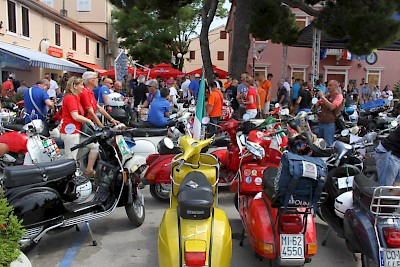 If you love scooters an event like this is well worth a visit, thousands and thousands of Vespa’s from around the world, a carnival like atmosphere, people dressing in their national costume. Live music, beach parties, gala dinners for over 2,000 people, ride outs, stalls and everything needed to make a trip like this as memorable as possible. In total there were 110 British scooterists from the Vespa Club of Britain amongst the thousands in attendance, not a bad turn out considering the distance. A great fun packed weekend in a lovely part of the world. It’s hard to imagine that not so long ago this country was embroiled in a brutal civil war but there are enough war torn buildings around to serve as a stark reminder.

To be fair though the rally was just a small part of this trip, the ride there and back were more important and after a weekend in Biograd we headed to Split for an overnight ferry to Ancona and a 300 mile ride up to Italy’s Lake Como for a couple of days relaxation (whilst paying exorbitant prices for the privilege), followed by a blast up through Switzerland and into Germany for a night in the Black Forest. A wet ride from there up to Belgium for a night in a pretty little town before heading to Zeebrugge for the ferry back to Hull and the ride home to Nottingham. We actually rode past home and went straight down to Donington Park for another scooter rally, a perfect end to an unforgettable holiday.

Next year the Vespa World Days event will be held in the South of France in St Tropez but there are plenty more UK and foreign rallies to try before then. We’ll be heading to Cleethorpes on Friday, then there’s Lincoln, the Lake District (and various other club members rallies), Venlo, Isle of Wight, Tilff, Woolacoombe… It’s a busy old life on the road. Get yourself out there…