For the first time, this year’s Tour of Britain began in Wales before continuing into England and Scotland. 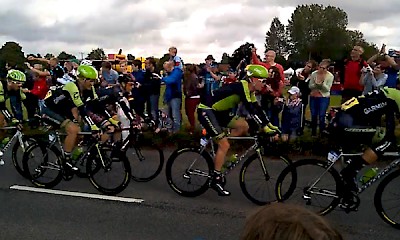 The first of 8 stages, ran from Beaumaris to Wrexham and resulted in Elia Viviani closely snatching victory from Mark Cavendish and André Greipel on the line of the 177km stage.

Stage Two didn’t go as well for Elia Viviani as the Team Sky rider finished 21 minutes behind the stage winner Petr Vakoc. This was an impressive ride for Vakoc who took not only the stage win but also the overall race lead by 11 seconds over the 162kms from Clitheroe to Colne.

After a disappointing second stage for Elia Viviani he needed to pull it out of the bag in Stage Three and that’s exactly what he did. He claimed his second victory of the race on the 216km stage between Cockermouth and Floors Castle, Kelso. Petr Vakoc’s race lead however was snatched away when he crashed out with only 3.2km remaining, leading to him finishing 10 minutes behind Viviani.

The yellow jersey didn’t change hands on Stage Four as Movistar rider Juan José Lobato managed to keep hold of his lead by 6 seconds over Edvald Boasson Hagen. Another close finish concluded the stage between Edinburgh and Blyth with Fernando Gaviria crossing the line just in front of both André Greipel and previously mentioned Boasson Hagen.

Yellow Jersey up for grabs?

Edvald Boasson Hagen finally managed to claim the yellow jersey on the fifth stage between Prudhoe and Hartside Pass with a narrow 1 second lead, despite missing out on the stage victory when he was passed in the final 150m by Team Sky rider Wout Poels.

Friday saw the tour travelling from Stoke-on-Trent through to Nottingham and with only two more stages to go, the racing really heated up as riders were seeking both stage victory as well as trying to release Edvald Boasson Hagen’s grip on the yellow jersey. However their efforts were in vain as the MTN-Qhubeka rider managed to extend his lead to 11 seconds despite missing out on the stage victory thanks to Matteo Trentin. 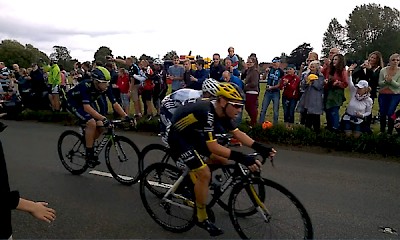 The home stage for us at Lexham

The penultimate stage was the longest of the tour at 225km between Fakenham and Ipswich, and even that distance couldn’t split the top riders as a photo finish was needed to give the stage victory to André Greipel who crossed the line a whisker ahead of double stage winner Elia Viviani. The tour leader finished fifth to keep hold of the yellow jersey ahead of the final stage. If you take a look to the side you can see some pictures of the Tour passing through Old Buckenham.

Central London was the backdrop for the final stage of this year’s Tour of Britain, and it was on this shorter 93km stage where Edvald Boasson Hagen secured his second Tour of Britain victory following on from his 2009 triumph. Controversy surrounded the stage winner as André Griepel appeared to have won until the judges awarded the win to Elia Viviani after Griepel was said to have impeded him and deviated, forcing him into the barrier.

The final top 10 results were as follows:

And thats the Tour of Britain over for another year. As always we've had drama, suprises and of course great cycling.