I’m pretty sure most people don’t try and break a world record on a 125cc scooter but that’s exactly what Markus Andre Mayer did at the start of September. He decided to challenge himself and try and ride the greatest distance on a standard 125cc scooter (a Scomadi 125cc Scooter was his vehicle of choice) within 24 hours. 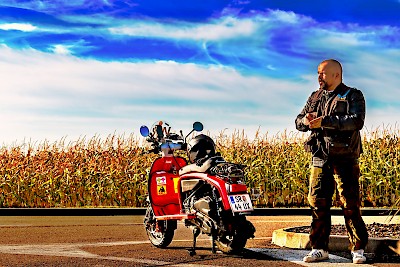 The previous world record was 1176 kilometres and set back in 2010, so it was about time someone beat it. And that’s exactly what Markus did, managing to clock up an incredible 1691 kilometres. In doing so he actually also managed to travel through 10 countries which is also a new world record.

If you want to have a look at his Facebook page for a bit more information about his world record and some pictures that were taken along the way then here it is:
www.facebook.com/Team-MayerScomadi-Austria-1024-Scooter-Double-World-Record

And if that wasn’t enough he has started planning his next adventure. He plans on travelling around the world in 80 days on a Vespa! We’re looking forward to seeing how this one plays out. He's also set up a Fabook page for the upcoming expedition so head on over to: www.facebook.com/Vespaworlddream

All photos taken from www.facebook.com/Team-MayerScomadi-Austria-1024-Scooter-Double-World-Record