LOCK, CHAIN AND COVER your scooter to make it less visible to thieves" is the message of the Met's new 'Be Safe' campaign. 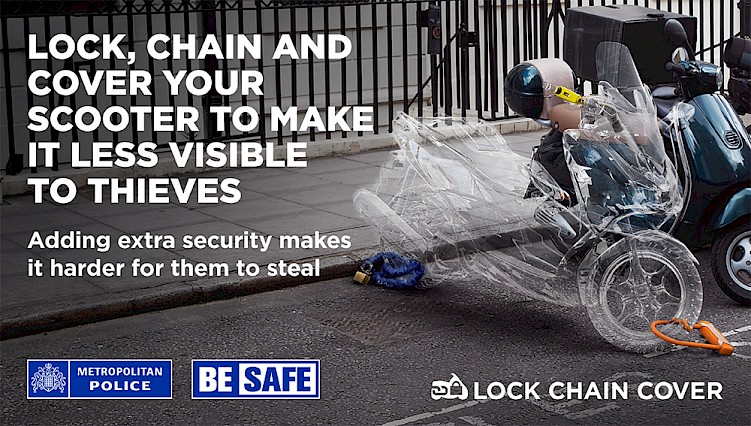 This urges riders of scooters, motorcycles and mopeds to use extra security on their vehicles to make it harder for thieves to steal them.

The campaign, which includes a new video, urges the public to join the Met in the fight against crimes committed on scooters, by reducing the risk of their bike being stolen which could later be used by criminals to commit further offences.

Almost 23,500 crimes were committed in London last year, using over 14,000 stolen scooters, motorcycles and mopeds. Along with offences such as robberies, burglaries and theft-snatches, in some cases these stolen vehicles were also used in violent crimes, and to transport weapons and drugs to be used in further crimes.

Policing activity is making a difference. In October 2017, the Met introduced new tactics including scrambler bikes, automatic tyre deflation devices and DNA sprays, to support ongoing concentrated policing operations. Since spring/summer 2017, there has been a significant reduction in these crimes. Scooter, motorcycle and moped theft has reduced by 52 per cent and there has been a 47 per cent reduction in crimes committed using these vehicles.

But by stopping these vehicles being stolen in the first place it is hoped that this, along with policing activity, will reduce further crimes being committed.

This new campaign builds on the success of the previous 'Be Safe' campaign, giving a specific method ('LOCK, CHAIN, COVER') which the public can use to secure their vehicle against theft.

This time, Londoners will also see prevention advice in advertising across screens on petrol pumps, on the back of buses and online.

Assistant Commissioner Martin Hewitt, Territorial Policing, said: "We have put a huge amount of effort into stemming the rise in moped-enabled crime, and are now seeing reductions, which is great. However, we are not complacent. All the new tactics and technology we have introduced will be backed up by really proactive policing.

"We will keep arresting offenders and running proactive intelligence led operations to make the streets more hostile for criminals to operate. Also, through focusing our efforts on dismantling markets for stolen goods we will make these crimes less financially beneficial.

"Today, I'd like to ask all scooter or moped users in London to become a part of our effort to make life harder for these criminals. Lock, chain, and cover your bike when you leave it. It is simple, yet effective, and if it makes a thief think twice before stealing your bike then it's worth it."

Tony Campbell, CEO of the Motorcycle Industry Association, said: "The motorcycle industry is working closely with the Metropolitan Police and the Home Office to help tackle scooter theft and associated crimes, and spread the message that locking and covering a motorcycle or scooter will make it a less desirable target to opportunistic thieves. We are therefore calling on all owners of powered two wheelers and everyone working in the industry to get behind a culture of always using physical security."

The advice we are giving through the campaign is:

Lock: Use a disc lock to help secure the front brake disc, or a grip lock to secure the brake and throttle controls.

Chain: use a chain lock through the back wheel (the front wheel can be removed). Secure your bike, with the lock taut to an immovable object such as a ground anchor or street furniture.

Cover: the bike as it makes it less attractive and harder for thieves to steal.