Cycling: The Importance of Tyre Width

A few years ago, we had the introduction of the 25mm tyres, which the majority of people use nowadays, as opposed to 23mm. 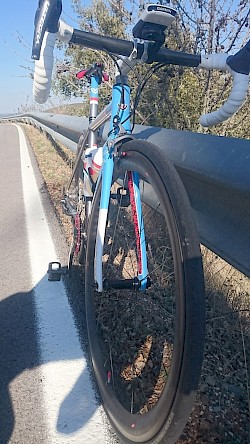 25s come pretty much standard nowadays when purchasing a new bike and are used by all pro teams as standard. So, why have we come away from thin tyres, when not so long ago we all used 21mm and 23mm? The consensus used to be hard thin tyres. So what’s changed? I’ve been looking at understanding the reasoning behind it.

I think the most obvious benefit is comfort, a softer ride. Lower air pressure tyres help take away some of the stiffness from a carbon frame accompanied by carbon wheels. This makes a significant difference.

The way I used to think, and many other people also, is that surely a softer wider tyre is going to be slower? But this is not the case. They are in fact faster! I’ve been using 25 for at least 2 years and notice the difference.

So what’s the science behind it?

Well, my understanding is with lower tyre pressure and a wider tyre this creates faster rolling resistance, which comes from a reduction in the contact patch between the tyre and road surface and less vibration being absorbed by the tyre. 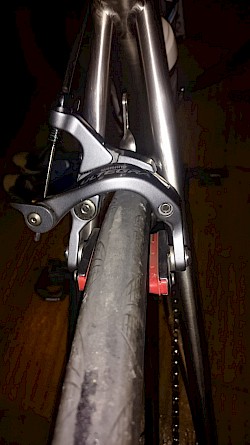 t doesn’t stop there. Now there is talk of 28mm tyres on a road bike and it’s been said they are even quicker! This got me thinking of when I used to tour back in the 90s on a mountain bike with slick tyres and thinking this is quick. All the bike couriers in London used to do it also. If the tyre is wider you get a problem because the tyre is not flush with the rim so it’s not aero, or it’s too big for the frame and callipers; some will fit, it just depends on your bike.

So this is all leading to changes in wheel rims, which are now becoming much wider. Some disc brake road wheels are over 30mm.

With a bike with disc brakes, you have loads of clearance for the wheel and tyres as you have no brake callipers.

Tests show that a 28mm tyre, with only 50psi air pressure, can give as much as 2-3 more watts, which is a lot over a long ride. The bike feels much safer on cornering. Cobbles and rough roads are absorbed by the tyre and there’s less chance of pinch flats as well.

It seems to be that this is the way it is all going.

So, why don’t we see this in the peloton yet?

Cycling is full of tradition and these things all take time to filter through, even with aero bikes, which is a serious advantage.

A lot of the time the fastest bikes aren’t the best looking ones! So, what does the future hold for road bikes? Fat tyres and disc brakes? Looks that way! It seems to be that road bikes are following in the shadows of some mountain bike technology. Is a single front chain ring next? I’ll talk about that in a future blog. So let's recap the positives and negatives of wider cycle tyres.