An Introduction to Bike Polo 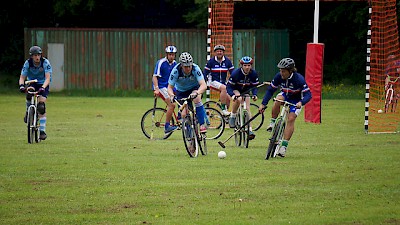 Many good ideas are hatched in the pub. This one was no exception. ‘How about playing polo… but on bikes instead of horses?’ somebody said. The advantages were immediately obvious. It would be low cost, little in the way of new equipment would be required, and anybody could play. It would also enable us to spend even more of ourt time on two wheels.

You may already be aware of bike polo. You may have seen it at the York Cycle Show, or even taken part in the sport. But did you know that bike polo was actually invented in 1891 by Irishman Richard Mecredy? It was a surprise to us too. It turned out that our idea was so good that somebody had already had it!

The sport grew steadily in stature since its inception, with its biggest moment coming as an exhibition sport at the 1908 London Olympics. Ireland beat Germany 3-1. As is the norm following exposure at any major sporting event, bike polo flourished. At its peak in the 1940s, there were over 170 teams playing regularly in England alone and numerous clubs were formed worldwide.

Sadly, bike polo’s popularity has waned and since the War fewer and fewer people have been playing. However, a number of clubs continue to play competitive bike polo and there are organised tournaments, attended principally by teams from England, Ireland, Scotland, France, India, the USA and Canada. 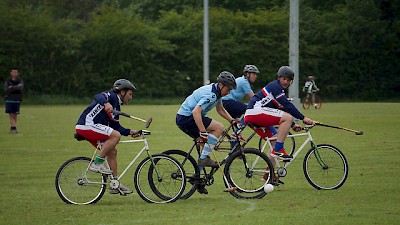 In any sport, unification can be a challenge. In 2007 a European Cup competition was devised to enable club teams playing in Europe to compete against each other under a common set of rules. This European Cup has been dominated by two French teams, from Le Havre and Rouen, although the British and Irish teams are closing the gap. Our team, Oakenden, who finished 3rd last year, have hosted the British leg of the European Cup each year. Following our home tournament in June this year we are currently in third place. With two further legs to play :-

The European Cup is played over 2 or 3 rounds annually. It is the most prestigious trophy in traditional (grass) Bike Polo in Europe. Teams from France, England, Ireland, Scotland and Germany have competed in the competition since its inception in 2007. Pédales Varengevillaises from Rouen, France have won the competition 4 times and Vélo-Club de Frileuse et Sanvic from Le Havre, France 3 times.

Oakenden Bike Polo have hosted a competition every year since 2007 (when the British round of the European Cup was held in York), since 2008 at Vigo Rugby club in Kent.

How do you get started?

To play bike polo you need a mallet (around £25), a bike, and a small ball; we use arena polo balls but a small training football works well. A regular bike can be used but to make things easier you may need to make some modifications. Most players ride short wheelbase fixed-wheel bikes, although many prefer to modify a mountain bike by shortening the handlebar (to allow freedom of mallet stroke), removing the front brake and any unnecessary equipment, and fixing on one freewheel gear.

The sport can be played by adults and children and takes place on a grass football pitch. (Hardcourt bike polo is a more recent development and takes place on tarmac tennis courts etc.) It is similar to horse polo but the rules have been slightly modified for safety and ease of understanding. Players must hold the mallet in their right hand, the handlebar in their left, and keep their feet off the ground. Matches are played over four 15-minute chukkas. Teams consist of four outfield players and a goalkeeper. The team scoring the most goals wins.